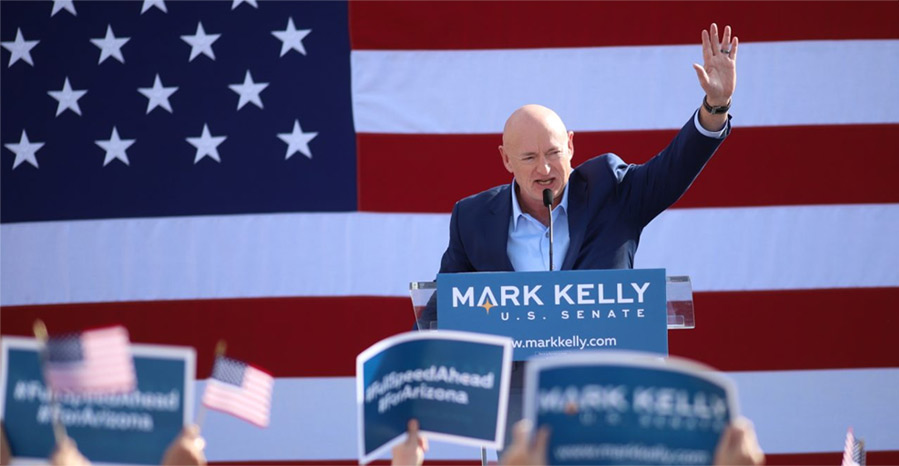 Mark Kelly: from the stars to the Senate

It wouldn’t be the first time an astronaut has joined the Senate, and Mark Kelly is poised to do it again.  Kelly is running for John McCain’s old seat, now held by Martha McSally who was appointed in 2018.  Mark Kelly, born 1964, is a former Space Shuttle astronaut, fighter pilot, engineer, and U.S. Navy captain. He also is an author and aerospace executive.

As a naval aviator, Kelly flew combat missions during the Gulf War. He was selected to become a NASA Space Shuttle pilot in 1996 and flew his first mission in 2001 as pilot of STS-108. He piloted several more critical missions with his final mission as piloting final mission of Space Shuttle Endeavour.

Most famously however, Kelly is the husband of former U.S. Rep Gabby Giffords, who was nearly assassinated while meeting with constituents in Tucson in 2011.  Kelly, along with his wife, have become huge gun safety advocates and now he is the leading Democratic candidate for Senate in the Arizona race.

The Arizona based polling firm, OH Predictive Insights, has been tracking the race, and have been polling a head to head match between Kelly and McSally. Their most recent poll shows Kelly gaining five points in just three months and now leads McSally 46% to 41%.  Kelly also outraised McSally $8M to $5M in their June filings.  Clearly Mark Kelly is a top contender to flip one of the three seats Dems need to take the Senate.